Best tips for shopping in Antwerp

.Ornit Avni-Gortler, Attorney and a fashion enthusiast, in a guest blog

Ornit loves traveling and shopping overseas and shares her experience
in Antwerp, Belgium, with tips and recommendations that will help us get ready to visit the city

Over the past two years, I have been to Antwerp several times thanks to a combination of some great concerts held there (Hi, Queen and Florence  &the machine) many convenient flights to Brussels plus Brussels’ proximity to Antwerp and discovering that Antwerp is an amazing shopping destination!

In Antwerp, the prices in stores were not very low, but still – great items and products could be found at good prices.

The street is long (but not like Oxford Street in London, for example) and stretches from Antwerp’s main train station (considered one of the world’s most beautiful) to the Old City.

So, what got me so excited about this special avenue? Let’s get started!

1.     The best of the European clothing retailers, which I have gotten to know over the years. Going into each one of them is a celebration of styles, textures, fits and colors (yes, even black & white) like Vero Moda, Only or Monki, for example.

Vero Moda is located on 23-26 Meir. The two-story store is spacious and has an excellent selection of women’s clothing. Everything is fashionable but not trendy or garish. The lines are mostly refined and elegant.

Only is right on the corner of Meir at 21 Levsstrat. It has similar styles to Vero Moda with a nod to a slightly younger line with items like Baker jackets, faux leather items and more.

At Monki, located at 73 Meir, I like to buy mostly shirts, pants and overalls. At the two-story shop, you’ll find trendy items as well. That means teenagers have just as good of a selection as women in their thirties and up and there are plenty of colorful pieces to choose from.

2. If you are into coats, underwear and basics, the ultimate destination in Antwerp is, of course, Uniqlo at 67-69 Meir. The store is spacious and offers a great selection of coats, cozy winter sweats, and good underwear that doesn’t fall apart in the wash. 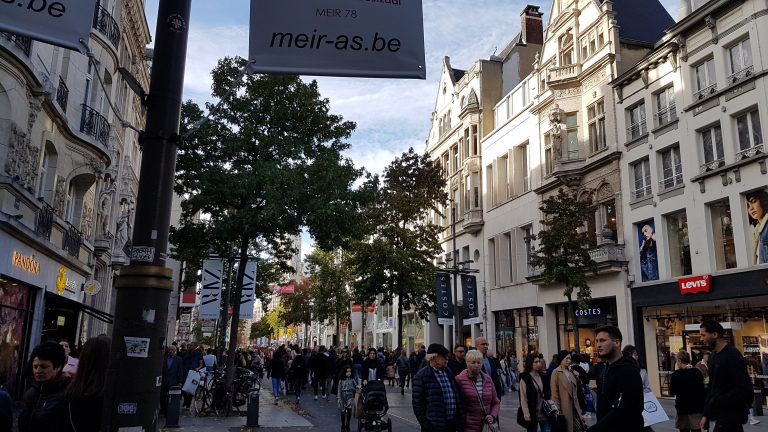 3. A winning combination for any shopping promenade overseas is a good branch of C&A branch together with a nice Primark branch. Both of are conveniently located on Meir 66 and 22/30 respectively, just a few minutes’ walk from each other.

It’s a great way to stock up on your kids’ summer or winter wardrobe, depending on the season and, no less important, find some good items no one will guess where you bought them at a really low price.

Primark is a great location that has bathrooms (you’d be surprised, but most others don’t), waiting areas with comfy couches and the ever-important charging stations for phones.

At C&A, you can find more expensive items, some of which are better quality but still at good prices. Somehow, every time I went into the C&A, it was either empty or half empty. That’s why I suggest you start early at Primark and not get there towards the evening when a lot of the stock has been messed up by the shoppers throughout the day making it hard to find some items and sizes.

4. The street itself has a mall named Stadsfeestzaal on 78 Meir and it’s a beautifully designed building both inside and out. It houses restaurants, cafes and some very interesting shops. One of them is Weekday which has some very high fashion at a price tag that doesn’t come close to designer prices. I really like their sweaters, overalls and their jeans department is worth checking out.

Another store in the mall is called Flying Tiger. It’s slightly smaller than other European branches, and the selection is limited. That said, if you like small items for the house or kitchen, small toys for kids and accessories all at reasonable prices, this place is for you.

5. You didn’t think I forgot cosmetics and makeup, did you?

If you like Rituals Cosmetics, they have a great store there.

When you’re walking down the street, it’s hard to decide where the best smells are coming from – the shops selling the wide array of soaps and lotions or the cafés tempting you with Belgian waffles…

In this category, I should mention Hema on 65 Meir – a department store several stories tall housing a wide variety of cosmetics on the ground floor.

6. And if all that is not enough, then you can also find some of the well-known retailers like Zara, H&M, Pull & Bear and Bershka which has a nice large branch there. The prices are standard for Europe and a bit cheaper than Israel.

7. Just a short walk away from Meir street you can find the Grand Bazar – a mall where I hit up several stores including a nice branch of Mango which was relatively empty and had no lines at the dressing rooms. There’s also a nice Body Shop location.

The highlight for me though is a shop called LolaLiza, which I first spotted in Ghent (but that’s a story for another post). The store has a selection of nice clothing for every occasion – office, evenings or going out on the town. It’s not cheap but also not terribly expensive. The lines are more for women and less for girls but they could probably also find nice pieces there, especially in the jeans and accessories departments. 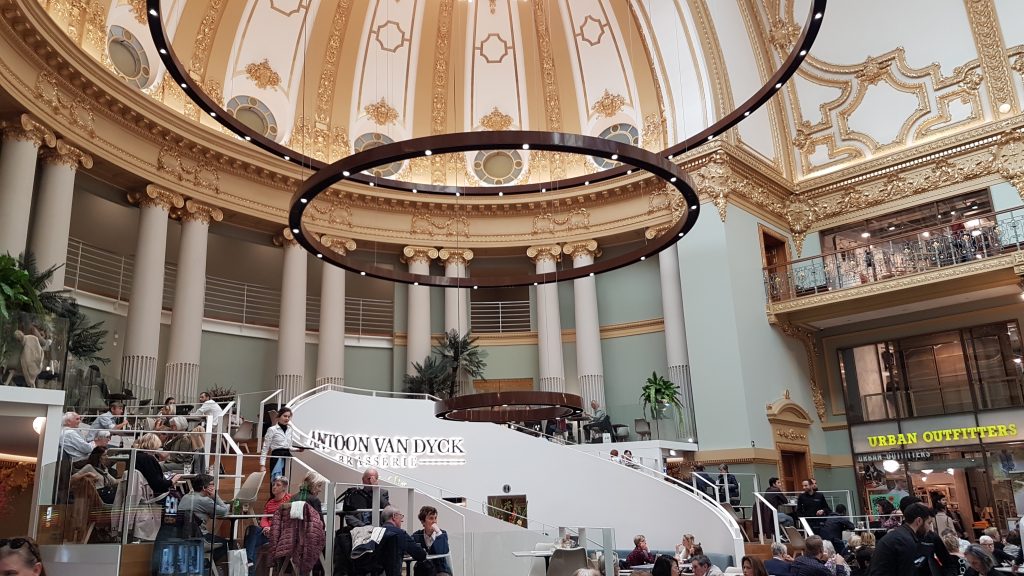 Before wrapping up, a few important tips

* VAT in Belgium is 21%. The minimum amount for a VAT invoice that can be applied for a VAT refund is €125. This is only for products which are taken out of the country unused and does not include services like hotels or taxis. Alcohol and tobacco products do not qualify for VAT refunds.

If you bought less than €125 at a certain store and then went back to buy more, ask the shop to issue a new receipt with the total amount.

Big chain stores may issue you a special invoice for VAT refunds as part of the sales process, ask you to fill out forms and go by the Customs counter when leaving the EU.

You should try the Refundit app that does everything online and allows you to get a refund for shopping at any store (including small retailers, not just the major brands). You’ll get a bigger refund and, in most cases, will save you the time and headache of going to Customs at the airport as the refund request is approved online. Just make sure that you get a regular receipt and not a special or a stamped tourist one when you pay.

* Please note – the stores in Belgium close very early. Many stores in Antwerp close at around 5 or 6 p.m. I strongly suggest you check opening hours in advance and plan your shopping sprees accordingly.

There are a few stores like Primark and C&A which close late (19:45 and 19:00 respectively), but it would be best not to leave Primark to the end of the day.

* One last thing: Stores are closed in Antwerp on Sundays, so take that day to enjoy the museums, parks, cafes, beautiful buildings and everything else that has nothing to do with VAT refunds!

Have a great trip and happy shopping!

PrevPreviousHow to shop tax-free in Belgium with Refundit ?
NextGet Ready For Your Tax-Free Shopping With Europe’s VAT RatesNext